In this article I’ll show you my top of model ship kits and how to make diecat model of wooden/metal ship.

How its Made? Building Model Ship 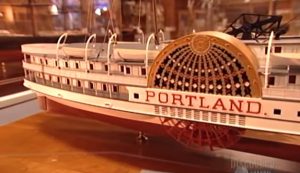 Model ships are made for navel-gazing. They’re representations of real ships. Some are built meticulously to scale with extreme attention to detail and are truly museum pieces. You can buy model ships pre-assembled or in kits. But don’t rock the boat, they’re made for you to admire, not play around with.

The Portland Steamer sank in the Atlantic in 1898. All lives lost. But its image survives in models. To make a model like the Portland, a worker selects some wooden pieces from a stockroom. Model ships are actually made of thousands of parts, big and small. These are just a few, and some are to be cut down. A computer guides a laser beam as it carves the larger flat pieces of wood into many parts. They’ll be components for the ship’s deckhouse. 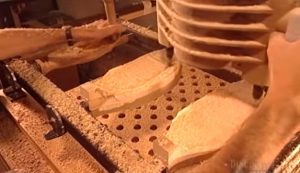 Next, a worker shapes a hull, or a main body, using a machine called a duplicating carver. Holding the machine stylist on the left, he traces around a master shape. This motion guides two routers on the right, as they chisel into basswood, making exact copies of the master hull.

To make resin parts, they mix polyurethane with some plasticizer and pour it into a mold. A chemical reaction causes it to harden. This takes up to half an hour. And then they pull a newly shaped lifeboat out of the mold.

Mold For Meal Parts of Ship 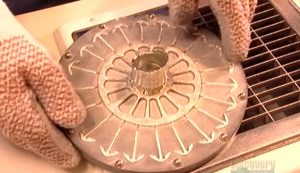 Next, a worker cleans up another mold to make it shipshape. It’s to be used to shape cast metal anchors. He places the mold in a centrifuge and pours a melted mix of tin, antimony and copper into it.

The centrifuge spins and this causes the metal to fill the cavities in the mold and solidify. He opens the mold and finds the anchors formed like spokes around a hub. It’s anchors away, as he snips them free.

Next, a worker sands smooth the bottom of the hull. Then he positions the first of the ship’s five decks. He glues wooden spacers between the decks. A special glue that dries in about 10 seconds allows him to work quickly as he builds the tiers.

Next, he submerges a deckhouse side piece in water to soften the wood. 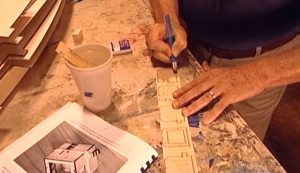 He cuts the little tabs to free other deckhouse parts from a matrix. After that, he carves out the center of two of the pieces. Then he glues a block between them and applies more glue to the edges.

He bands the deckhouse side, which is now wet and supple, around the structure. The moisture causes a chemical reaction in the glue, which strengthens it.

After he positions the deckhouse starboard side, he sticks a strip of clear acetate to the back of a band of windows. The acetate simulates glass. He paints the front of the windowed wall white, and then turns it around to paint red curtains on the acetate. 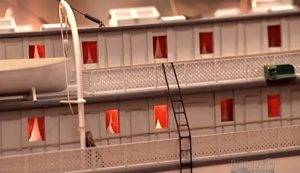 Other detailing has been laser etched into the wood. He glues the wall of windows between deck tiers, and the look is authentic. He positions paddle wheels on each side. These have 57 wood paddles held in place by brass radios.

Remember the anchors cast in the centrifuge mold earlier? He now positioned some on the ship deck. Then he prepares the lifeboats. The larger plastic one goes on the upper deck. This golden eagle is the finishing touch. 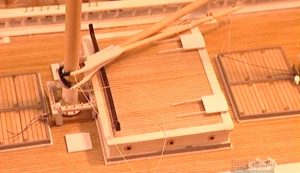 Here, another worker rigs up a four-masted schooner. Using surgical clamps, he pins the ropes down so they don’t get in the way. Then he measures a piece of decking to make the top of the deckhouse. He glues it to a base and then positions it on the ship.

Next, a jeweler’s life spins a piece of brass as a worker manipulates a cutter milling parts for the ship’s bell. Once it’s mounted, this ship model is ready for a sea of admirers.