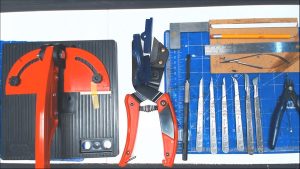 In this article I give my opinion about cutting tools brands: DSPIAE, Xuron and God Hand. Of course, I could make review about Tamilya and other brands but maybe next time. What is your best sprue cutters/nippers? 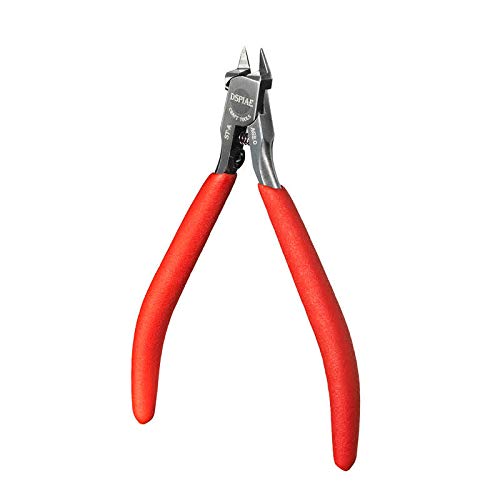 So they have a single blade and the other side has a hard flat surface, like an anvil. It’s actually a pretty common way of doing sprue nippers you can do them with two blades, like a pair of scissors, but this style, the new versions which get really good reviews, which might actually be the same exact nippers with a different brand on them.

The Gundam planet nippers, that a lot of people are a fan of all, have a single blade and I’ll flat anvil like surface on the other side.

One, two or three blades? Is there any significant difference?

On the other hand, to me a one, two, threes, which get a lot of really good reviews are two blade cutters.

And I did get these on the recommendation of a couple of guys in the scale modelers critique group. These are cutting forceps actually basically sprue nippers but built in the style of tweezers or forceps and they use them, sells a bunch of versions. I got to have the flat styles. 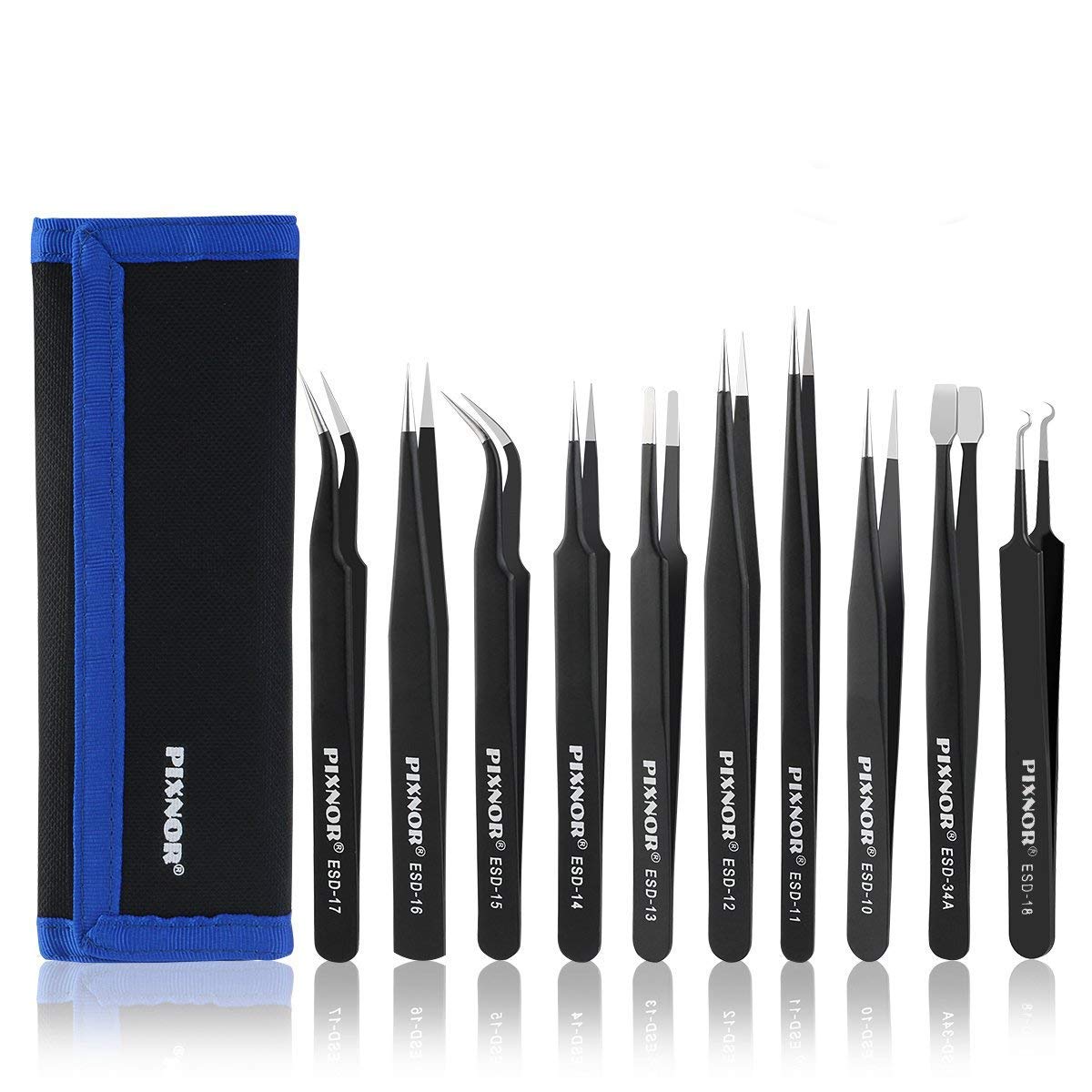 They are dual cutting edge, like a pair of scissors outside from being kind of novel and small and being able to reach into kind of interesting spots. These are also cheap.

I use these nippers all last week while I was waiting for these new guys to come in. They’re great and certainly the most affordable, decent nippers I have.

The only real issue with them is it takes a fair amount of strength. You know, you don’t have to leverage a help that you get with a pair of scissors. Now I’m huge and strong like So I have no problem, you know, snipping sprue with this. But, but my daughter who’s six and she found it kind of hard to pop out her little Gundam character using those.

Now these DSP ease really did a beautiful job. Very similar to the God hands I had before. I mean there’s a tiny little mark you need to clean up on one of the three cuts. The other two you really can’t even tell where I cut. You might need zero cleanup or just a quick swipe with a sanding stick. 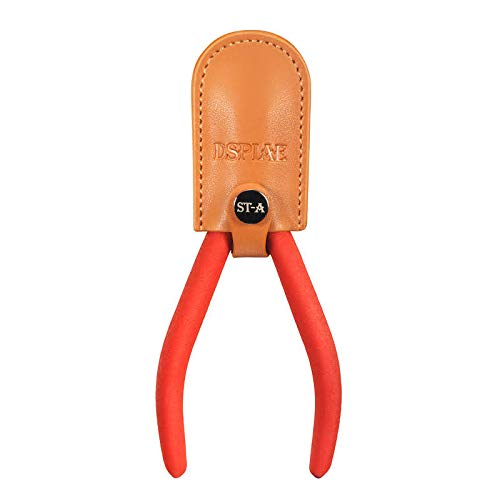 So they cut well, they cut really well. They also have a pretty over the top box. I feel like I’m getting an apple product. You get this nice from hard cardboard box. It came in like a tamper resistant seal. You open up, you get layers of goodies. So on the top and the translation into English is kind of poor. Like a lot of products in our hobby that you get from overseas. But they do explain exactly the best way to cut with them, which is nice.

You get this, which they call me nipper holster. I will not be wearing it on my belt, but it’s to protect the blades. When you put them up, you can then you also get a serial number to make sure you don’t have a forgery inside here and some more information, a little information booklet and such and so forth.

A cleaning cloth that’s pretty branded, even pretty nice. And then once you get inside you have the actual nippers and a little tool to adjust the spring lockout distance. If you want to the nihs in the hand, they feel they’re about the same size as a pair of God hands or a to me a nipper cutters. You can clearly, it’s hard to see obviously with this camera.

But you can see one, one side is a sharp blade and the other is flat but they’re really well made, easy to hold all the things you look for in nippers. So anyway, I’ll post some follow up once I’ve been using them for a couple of months. But if you’re in the market for a new pair of nippers and you like stylish red and a ton of Aquaman, like a nipper holster, considered this style. 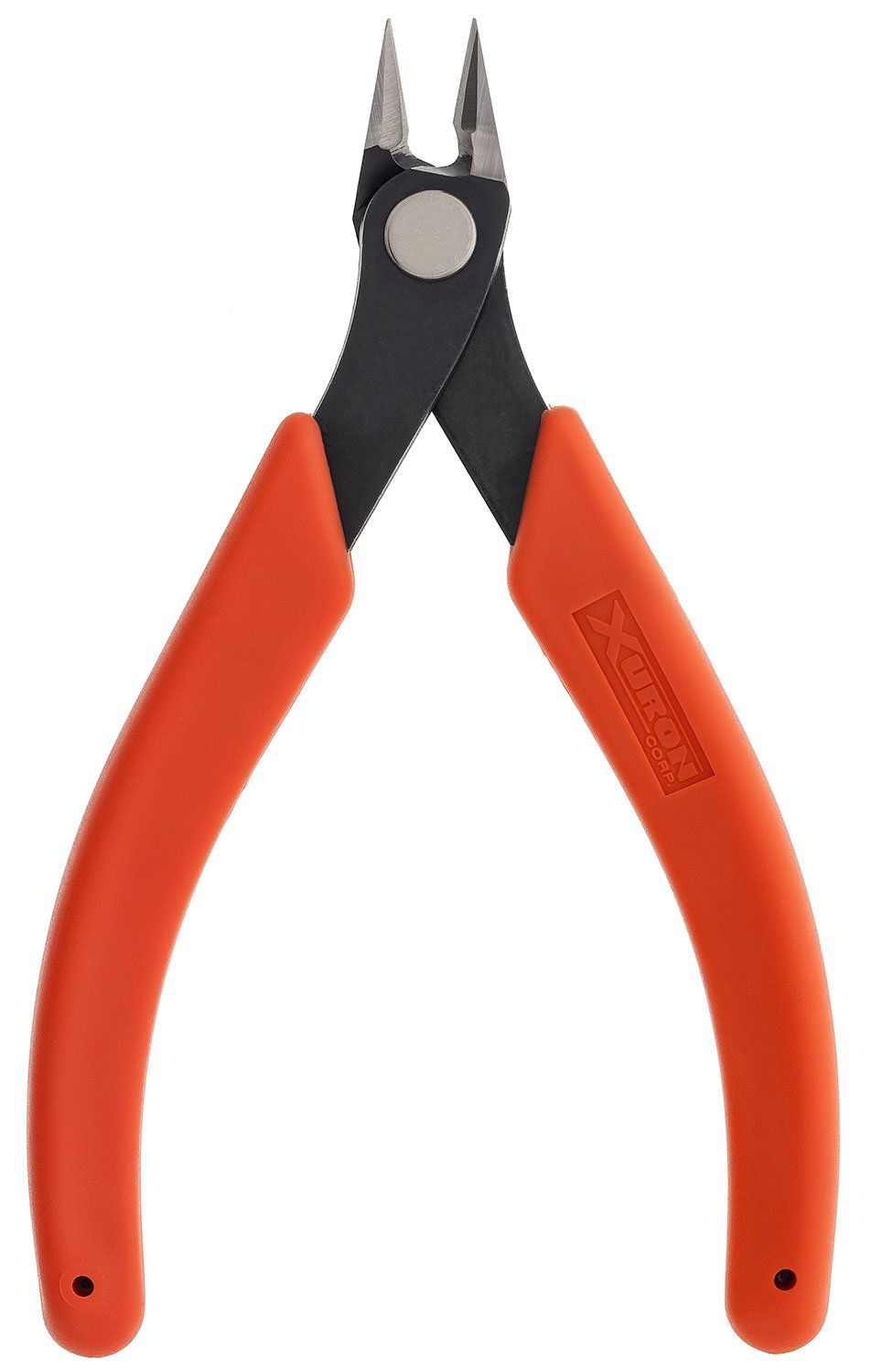 They’re getting a little up there and I wanted something that hadn’t even finer point on them. So it kind of came down to me between the Tamilya, extra sharp a sprue cutters, which excellent reviews, everyone seems to love them.

What can I say about cutting abilities?

They are very comfortable. They’re larger than these guys other than, you know, these are good but it’s, it gets a little fumbly like little smaller. These good size feel better. The hand, very, very large spring action was just something you get.

So it’s a little more comfortable when you want to sit there and cut with them when these guys cause you gotta kind of pitching a little further. Cause that’s how people cut model kits off of screws. 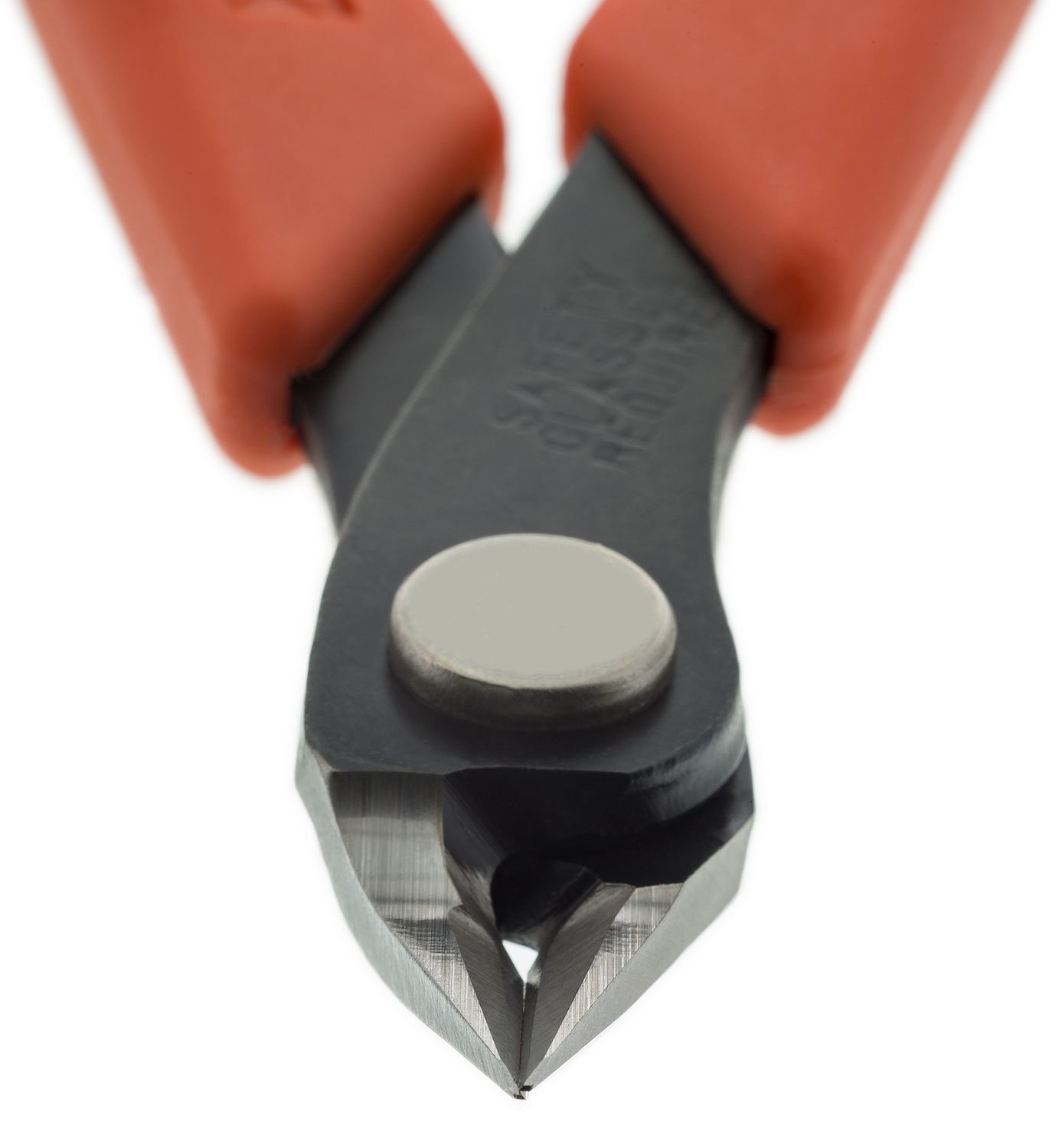 You just sit there and go over and over again. The other thing that’s had those I do like about Xuron as they don’t have the compression cut that where it actually gets the two blades that actually meets completely together.

That’s how they achieve their flush cut is it just pinches the plastic with very sharp blades and cuts it. And when and how do you know when you have to replace those is when it starts pinching plastic instead of cutting through it.

Now when you’ve got something like Xuron, it has their shearing technology where the blades actually slightly overlap.

They slightly overlap when you squeeze them together. So they don’t come together completely flushed. But that’s part of it. That’s part of the appeal of it. And the four tens had that, but they had a lot of kind of slop in them. Um, you still got a pretty flush cut, but it wasn’t, it wasn’t, I knew they could do better.

So after reading about reviews, and really what it came down to was the two Mia’s are ridiculously expensive. I know people swear by them, but they’re like 30 some odd dollars here in the United States and maybe cheaper in Japan. And I’m not against paying money for quality tools. I’m really not. But in this case, I wanted to, I zoom was a known quantity to me and I just figured that I would give them a shot, give them the benefit of the doubt and see, see what they could do with, with, their answer to the, to me an extra fine or extra sharp sprue cutters. 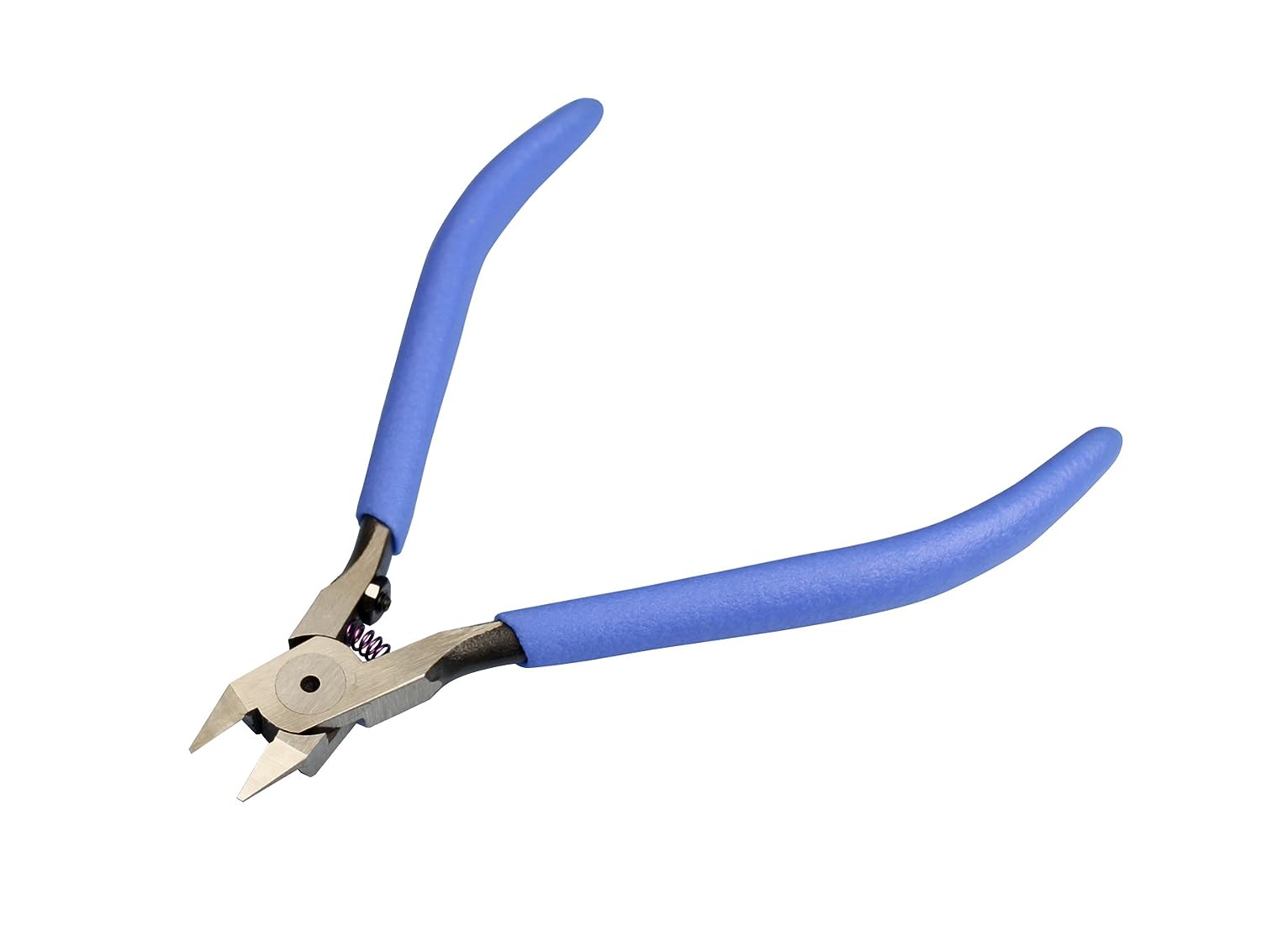 Let’s take a look inside. Pretty open this. So inside you’re going to get your site gutter and it’s clear plastic tube. You want to keep this clear passage of these to protect your site gutters if you’re not using them. There’s like a broad here that prevents it from over extending it kind of hits that part there.

This one is actually a double edge and one of the greatest thing about God is the low profile here as opposed to discipline did this actually a little bigger. And sometimes when you’re just cutting to the certain runners, it’s kind of hard to get in the tight places. And this kind of helps having that really thin profile.

That’s one of the advantages. And that just cuts like butter. It’s really nice.

It’s going to leave stress mark no matter what. So that’s a big difference there. And it’s great to use this if you have clear kits.  I mean, if you like Claire Kits, go with this guy. Yeah.

Now next question is how much does it cost you to get this now comparing anything with this one, it seems like you’re getting, you’re just getting a psych gunner. I mean why you spent a lot, right? It allows it demonstrated. It’s not, you’re very nice to have this, especially when you’re caught in clear plastic or maybe those a chrome plated ones.

So you just want to get good, clean, flush, and less of the stress marks. So that’s what you want this for. And now this particular tool, think of it as in the schools that it’s actually hard to come by and the only made the limit run of this for each batch.

Again, it’s one of those, it’s a nice tool, but only a few people will get it because it’s really expensive. Yeah. And I know it sounds silly getting a $70 till, but another way to think about this, it’s an exclusive and why people buy those crazy ex, uh, schools as well because they look nice or this actually this makes your kid knife and on top of that, it’s just one of those that you’ve been using a tool, uh, slide shoes also, if something you’re using on a regular basis, it’s good to buy the good stuff because you’re using it every day. Or battery I build pretty much every day, so I use it regularly. Same thing would make shoes. It’s one of those that you don’t want to cheap out on, but that doesn’t mean that necessarily mean that you have to buy this particular one.

There’s probably other, high end, psychotic is out there, but it’s good, you know, to try it out. And again, once you tried this out, got like butter and it’s hard to go back on this one and it’s something that you have to experience yourself so dirty. It’s really great.